More than 700 Marines are headed to Music City! MP&F Public Relations is working with the United States Marine Corps on their largest community outreach event of the year: Marine Week from Sept. 7 to 11.

The events will feature hands-on displays, live demonstrations, time-honored Marine Corps traditions, an array of musical performances by the Marines and other artists, and additional events to showcase the history, military capabilities and community involvement of the Corps. All free. All open to the public. And all family-friendly.

In preparation for this event, I had the chance to travel to Parris Island, S.C., to participate in a four-day workshop designed to give civilians a taste of what it’s like to be a recruit in boot camp. The 14-hour days started around 4 a.m. when I was transformed into a world of running, pushups and mental challenges. The group was assigned a real drill instructor who required us to march and run in formations, all while yelling, “Aye, sir,” after every command.

We had the chance to rappel off a 55-foot tower, shoot an M-16 rifle, spend time in the gas chamber (nothing live was released, but the residue was enough to prove the point) and try out the obstacle course (spoiler alert: I didn’t do too well).

The best part of this experience was hearing Marines, veterans and recruits share stories about why they joined the USMC and what the Corps means to them. The answers varied, but all were noble.

We attended a graduation ceremony and witnessed 380 recruits officially become Marines. The recruits aren’t allowed to make calls during boot camp, only send letters through the mail. No computers, phones, music … nothing connecting them to the outside world. I saw the moment little kids ran into their parents’ arms. Parents and significant others squeezing their new Marine so tight you could see they were scared to let go. It hit me hard as a wife and a mother.

I took away from this experience the knowledge of what a Marine truly is. Their commitment to this country and their fellow Marines is astounding and seeps through every pore of their being. They are trained to be the first responders in times of crisis from the air, land and sea. Marines put their lives on the line to protect our freedom in situations and countries you and I would never dream of going into.

I hope you will bring your friends and family to some of the Marine Week events, so you can learn more about this incredible branch of the military. To all military personnel past and present, thank you for your sacrifices and service to this country. 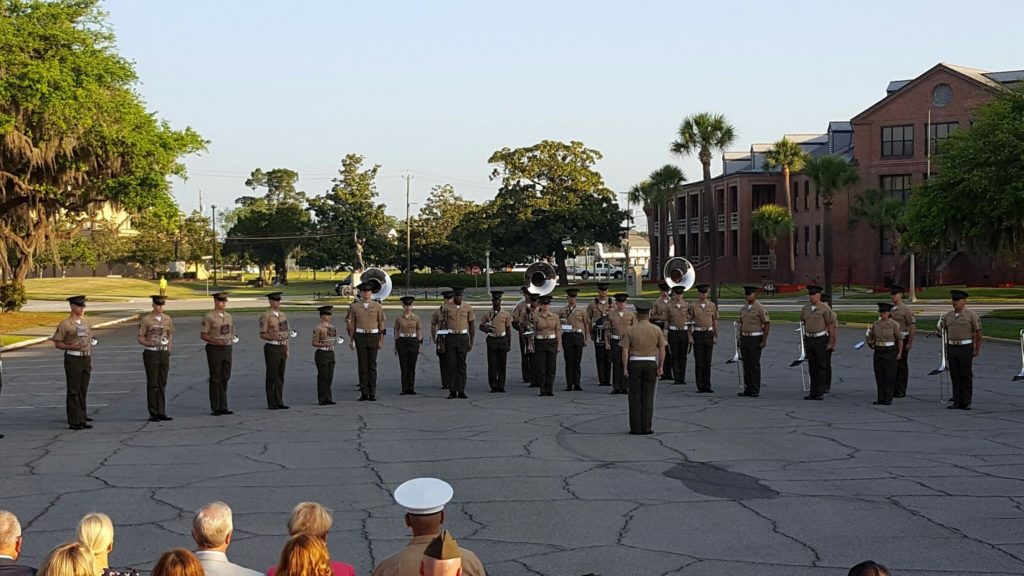 The USMC Band performed as the flags were raised. You’ll have several opportunities to see them during Marine Week Nashville. The recruits marching to their posts during the graduation ceremony. My drill instructor. This was the happiest I saw him. In order to rappel, I had to tie my own harness using a single rope.